Shadows Of My Past...Replaced By New Memories! 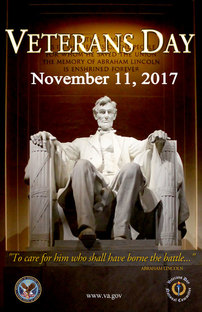 By: Michael J. Little; Edited By: Haley Smith, Kyle Dewhurst, Zach Ryan
​​
Veterans Day has always been emotional for me because I have an overwhelming sense of guilt. So many of my friends never get to celebrate Veterans Day. The night before, when I was preparing my suit, something in my mind told me I should wear my VFW cover, which I never do. While I am a Life-member of the VFW, something inside me just doesn't accept the fact, that I am a Veteran of Foreign War. Nevertheless, this year was different, I wore my cover with pride for what it represents to me and others who have served.

I arrived home from Afghanistan seven years ago this year (11Nov2010). Since I have been back, I have dealt with a lot of issues that have caused pain in my everyday life. I reached a breaking point two years after I got home, when I went to my command and told them I was going to commit suicide. Instead of helping me or giving me assistance, they told me I would be okay after I went home for six months.

Six months passed and nothing changed. The pain I was feeling kept growing inside of me; day after day images from my experiences would haunt me. After finding out nine of my friends had committed suicide, I turned to alcohol as a coping mechanism.

My friend, Ryan Gallucci, reached out to check on me and ask if he could help me; he was working in Washington, D.C. for the VFW. He listened to my story and helped me tell it to Stars and Stripes. I always say it was Ryan and the VFW who pulled me off a barstool and saved my life. They started me on the path I am on today, which currently has me as the Legislative Director for the Association of the United States Navy.

This Veterans Day, I was at Arlington National Cemetery for the National Veterans Day Ceremony. I was there in attendance with the Association of the United States Navy (AUSN), proudly wearing my VFW cover. Its funny when you think about it because we are all Veterans who represent so many different organizations. Personally, every day I wake up and go out in public, I represent 45 different organizations.

After the ceremony, a few members of the VFW came over and said they needed someone to lay the wreath at the Tomb of the Unknown Soldier on behalf of their 1.2 million members and every veteran who had given their life in service of their country. Naturally, I told them I would be honored to lay the wreath, and walked over to see who I was laying the wreath with.

When I walked over to the VFW’s wreath, I was instantly introduced to the National Commander in Chief, Keith Harman. As we shook hands, he told me he appreciated me for taking on the task of representing the VFW by myself and gave me a challenge coin for my service. It was at this point, that I realized I would be doing this task on my own, and an overwhelming feeling started to sweep through my body. My emotions and nerves started to take over my mind and body; the thought of laying a wreath to honor my shipmates and for those who gave the ultimate sacrifice was the most honorable, yet terrifying thing for me to do. The National Commander may as well have just said, “If you screw this up, Veterans Day will be destroyed from this day forward.” Good news, even if he said that he would have been wrong.

I stood there alone, thinking of my friends and shipmates that I had lost. I thought of my friends who didn’t make it home alive. I got a powerful feeling of unworthiness to lay the wreath, almost to the point I just wanted to back out and ask someone else to do it for me. I got closer to the front of the line and I began checking my uniform and fixing my hat.

Before I even realized it, I’m was at the toe line. The VFW Ceremonial Guard stands next to me and told me he had my back and he would call the orders. He put me at attention and he told me to forward march.

I might as well have walked through a glass door; I was instantly overwhelmed and thought that I couldn’t take another step.

I pushed to take my second step, followed by the next several steps to get to the Tomb Guard to present the wreath. There were hundreds of people in the area. The announcer said, “The Veterans of Foreign Wars, VFW”.

All I could see was the Tomb of the Unknown Soldier, and I instantly felt a wave of emotion. I felt like every one of my friends was with me telling me to stay strong and stand proud. When I got to the tomb, I gave the Guard the sharpest salute I had ever given and dropped my hand ever so slowly.

I took the wreath and turned it around and hand it to the Tomb Guard, who then accidently crushed my already cold and numb finger.

As I stood at attention, I became breathless and overpowered with the view, if reminded me of the life my fallen Shipmates had lived, and the presence they still have in our Nation. Standing there looking at the Tomb of the Unknown, sparked a sense of pride in me, unlike any feeling I have ever felt before.